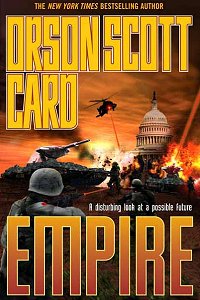 It’s a horrible thing to start out a review on but to be honest I got this book out by accident. I wasn’t paying attention and thought I grabbed part of the Ender Shadow series. That being said because I’m trying to broaden my pull a bit I didn’t sweat it and jumped in curious to see what the man who made the Ender Saga could do in more modern setting.

Now to be fair this style book isn’t my usual go to. I don’t have the interest in stories of politics and such so admittedly it had an uphill battle. However I did get drawn in. I choose to look at the story as a kind of “what if” experiment. The setting of modern times with a bit of fantasy makes you think about what you would do if this was going on around you. Admittedly it’s a bit boring / hard at times to follow as the writing style to me feels a bit bland. But it still made me think about what might be. In that case it did in the end become enjoyable for me even if some parts seemed to leap to more fantasy elements rather then stay based in reality. Just because you don’t expect something doesn’t mean it can’t happen and to me makes the point of a story like this to keep thinking about what could happen that you don’t expect is more important then trying to only constantly counter what you know.